After going from a pole barn to a completely enclosed barn, one things was clear: We had to switch to some sort of tray system for waste removal. I had went about 15yrs letting bunnies poop on the dirt ground, only to shovel it out every 6-8 months or as needed. This works pretty well, except for when mother nature decides it’s time for a 3 month heat wave of 100+ degrees, or a foot of snow on the ground which leads to frozen/busted water lines.

I finally had enough and spent a couple thousand dollars and added onto a 12×12 shed to make my new barn.

I immediately started using Pine shavings which I had always used in my show carrier cages as it seemed to work well. However on the first day I had to seal up the barn and turn on the new A/C it was very apparent that I had to deal with something I wasn’t expecting. Ammonia levels built up to the point where it would sting your eyes when you walked in the front door. If it was that bad for me, what about for the rabbits who were in there all day? Even emptying and washing the trays every 1-2 days was not enough.

The first product I tried, which I still like for cleaning, was: Zaps It!

I got the idea to use a watering can to dilute the liquid and sprinkle it over the wood chips to sort of treat them. This worked for about 2 days and left a nice smell in the barn. However it was a complete waste as it didn’t help in the long run and really the Zaps It! Is only supposed to be used for the cleaning up of urine. So I use it now on the concrete floor, walls and trays for cleaning only.

The next thing we purchased as an evaporative cooler that is supposed to cool the air, with the windows open. This works GREAT when the humidity is below 50% and in north AL we went through about a 3 week stretch where we could use it and it helped, but not since then. I would highly recommend this type of cooler to people who live in climates with super low humidity. It’s cheaper to run then the A/C and you are able to cool the air as it comes in through a window.

Ok, so it was too humid and hot for that option. I heard about Equine Pine from Will Sandy who has horses and already knew about it. I eventually tracked down some
at the Tractor Supply Store, where you can get about 40lbs for $6.00 or thereabouts. I wasn’t quite sure how to use it at first, because it looks very similar to rabbit food
except it’s more peach colored and larger.

I sprinkled it lightly in the trays, not completely covering the bottom, but maybe about 2 cups per rabbit. This stuff EXPANDS when it gets wet and soaks up liquid and traps odor.
Would you believe, sealed up in a room with A/C, you can easily last about 1 week before needing to empty trays with this stuff? I still empty trays every Saturday and Thursday just to
be on the safe side. I have almost no odor in my barn anymore, and this is all I use.

One other product a lot of people swear by, but which I don’t particularly like is Sweet PDZ, also available at the Tractor Supply. I picked up a bag to try it out. 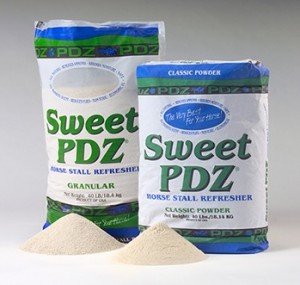 This resembles cat litter and can give off a lot of dust. It is supposed to clump up and trap odor, which is does, but when it comes time to empty a tray, you have to scrape it out, because like cat litter, when it gets wet it’ll stick to the surface. Where-as the Equine Pine, clumps up and easily falls out of the tray from its own weight when the time comes to empty.

From the few times I used it, it did work pretty well and comparable to Equine Pine, but the cleanup adds precious minutes and a little bit more back breaking labor of scraping for me to continue to use it again.

I will now be using the Equine Pine for not just my show carriers, but the trays full time, year round, and cannot recommend it enough.